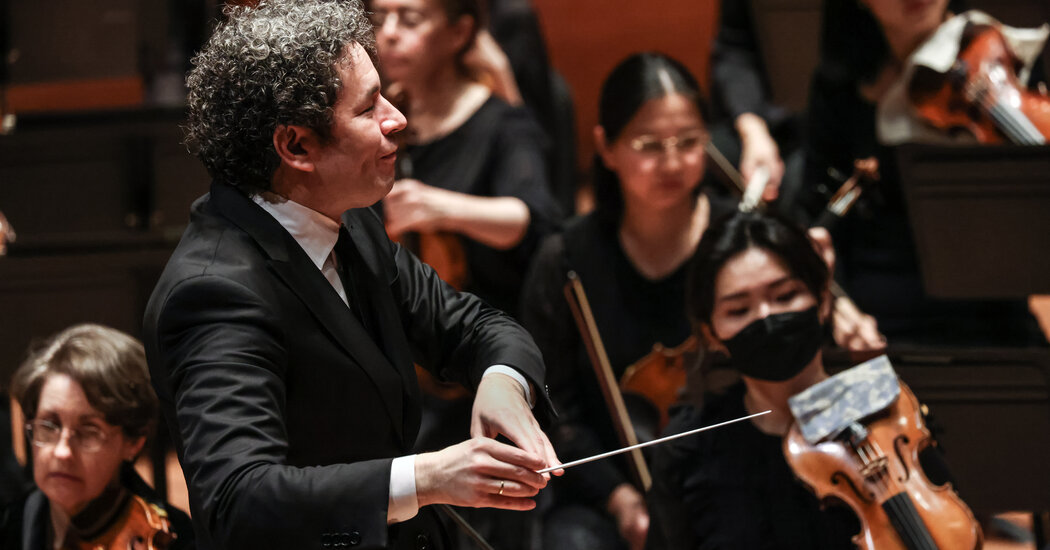 
Recalling Holst and mid-20th-century film scores in its lush colors and noirish dissonances, the piece has at its center a raucous movement recalling Ortiz’s Mexican heritage and her modern sound world: “the unique vitality born out of the entrails of the land I come from,” she says in the program. That driving vibrancy then recedes, in quiet music gently perforated with a pricking constellation of high-pitched percussion. In the final moments, wind instruments are tonelessly blown through, conjuring the sigh of history itself.

Dudamel’s interpretation of Schumann’s Second was punchier than his First, while feeling appealingly improvisatory in a first movement that keeps unexpectedly sidling into new material. Avoiding emotional indulgence in the third movement, this conductor made the music seem a bit impersonal, a play of sound — the winds lovingly passing around solos — rather than a poignant narrative. But the energy throughout felt honestly built, never overemphasized.

The Philharmonic doesn’t play these days with old-school brilliance or majesty, or with the feverish edge that Leonard Bernstein brought to Schumann’s symphonies with this orchestra in his classic recordings.

But with Dudamel — his tempos moderate, neither rushed at one extreme nor sentimentally milked at the other — the ensemble was genial and eager. And its sound was sometimes arresting, as when the strings floated downward in hazy scales at the end of the First Symphony’s Scherzo, or when the winds massed near the end of the Second to uncannily organ-like effect.

Dudamel’s appointment to the Philharmonic’s podium is, of course, far from a sure thing. But it was Deborah Borda, the orchestra’s chief executive, who nearly 20 years ago, in her previous position, grabbed him for Los Angeles when he was just emerging on the international scene. The New York Philharmonic, still nostalgic for the glamorous days of Bernstein, may well jump at the chance to hire one of the few present-day maestros to have achieved that kind of mainstream celebrity.

One thing is clear: Displaying his lively approach to the standard repertory, coupled with an interest in living composers — particularly female ones of color — these programs are meant to show off Dudamel as the model of a 21st-century maestro.

Is It a Good Idea to Pay Off Credit Card Debt with Your Retirement Account?

Treacherous Trudy is an Absolute Badass But Is She Real?