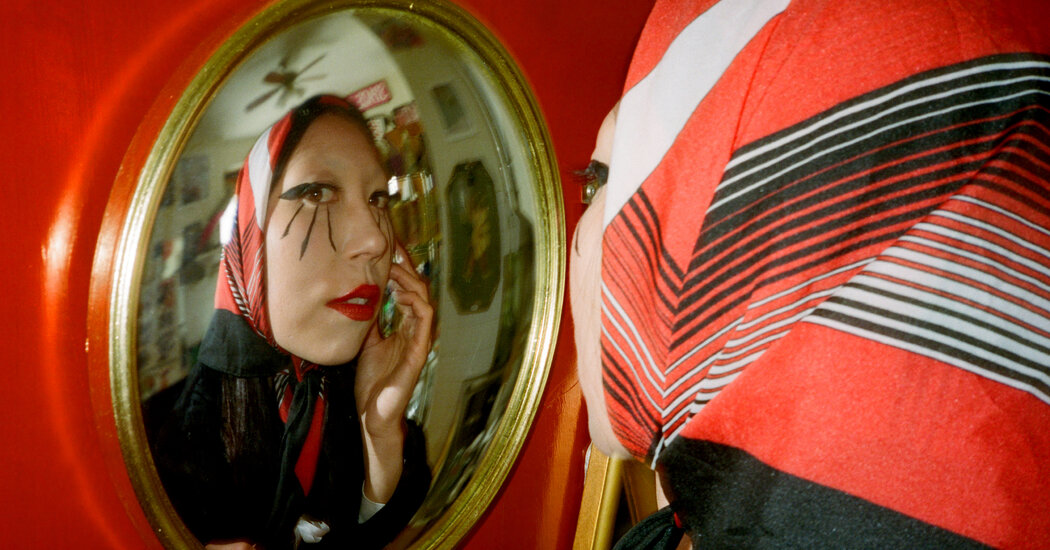 
LOS ANGELES — For most of 2020, Sasami didn’t feel like it was an appropriate time for her to make music.

A year after the singer and producer released her self-titled debut, a collection of electro-inflected indie rock, the Covid-19 pandemic was raging and a racial reckoning was provoking important questions. So she paused and studied. Sasami’s background is in classical music, but while in isolation she educated herself on Black cultural appropriation, learning about topics like the blues and minstrelsy. “My takeaway,” she said in an interview on the patio of her Northeast Los Angeles home, “was that I wanted to appropriate white, male music.”

Specifically, she wanted to take on metal. “It is such a cis white male space,” she added, while drinking tea at a picnic table on a bright but chilly January afternoon. She wore a thick sweater over her cropped sailor top. “There is room for someone like me to come in and make a mess in it.”

The result is “Squeeze,” an album out Friday that feels both darkly menacing and openly heartfelt. Sasami assumes the roles of tormentor and tormented, contending with a world that can be emotionally overwhelming in so many ways. “I wanted it to have this chaotic energy, as opposed to just evil energy,” she said.

“Squeeze” was largely made in the house off an impossibly steep hill in the wooded neighborhood of Mt. Washington that Sasami shares with fellow musicians Meg Duffy, who records as Hand Habits, and Kyle Thomas, best known for his work as King Tuff. For a year, they collaborated on each other’s recent and yet-to-be-released albums, with Sasami producing all three of them.

Sasami, 31, is pleasant and measured in conversation, but she has a wild flair in her appearance that’s even more pronounced onstage. That afternoon, she had affixed three crystal rhinestones above each ridge where there would usually be an eyebrow. A thin red line danced across each of her eyelids and off the sides of her face.

Though her debut album tended toward subdued sounds, her turn to metal isn’t as surprising as it might seem. While promoting “Sasami,” she continuously rammed against preconceptions. “I was touring with an all queer femme band and every sound guy was like, ‘Turn your amps down,’” she said. “Inherently that just makes me want to play louder.”

The night in February 2020 before Sasami left for a songwriters residency at Hedgebrook, an isolated retreat farm off the coast of Washington that hosts women and nonbinary writers, Thomas convinced her to go see Barishi, a brawny metal band from his Brattleboro, Vt., hometown. “I was literally having a spiritual experience,” she said. “I was moshing by myself in this dive bar downtown.” Barishi now plays as her live backing band.

When some of Sasami’s friends heard about her plans to make a metal album, there were concerns. “She writes such pretty music that I was really worried that she was going down a weird path and it was just a fleeting interest for her,” said Michelle Zauner, the author and musician who performs as Japanese Breakfast. “I felt really bad for doubting her, because what she came up with combines this timeless, beautiful quality of her natural songwriting with something really unique and aggressive.”

This latest progression is another point in Sasami’s unpredictable trajectory. Born Sasami Ashworth, she grew up in the South Bay city of El Segundo, Calif. She describes her father as “a Caucasian baby boomer” who would burn her CDs filled with acts like Steely Dan, the Beatles and Fleetwood Mac. Her mother’s side of the family is Zainichi, ethnic Koreans who came or were taken to Japan during the colonial occupation. “My mom, like most Korean parents, put me in piano lessons when I was 5 years old,” Sasami said.

In middle school, she switched to the French horn to differentiate herself from all the girls who wanted to play the flute or the clarinet. “I was specifically picking the French horn to be awkward,” she said. “It was the weirdest instrument you could pick.”

She attended Los Angeles County High School for the Arts alongside members of Haim and Empress Of’s Lorely Rodriguez, where she “listened to nu metal and Elliott Smith and went through all the normal teen angsty phases while also practicing scales every day and auditioning for conservatories,” Sasami said.

After graduating from Eastman School of Music in Rochester, Sasami returned to Los Angeles, where she worked as a music teacher in classrooms and led group “Mommy and Me” sessions. She also began assisting Nate Walcott, a member of the group Bright Eyes who composes for films and TV shows. She joined the post-punkish band Cherry Glazerr as the synth player and eventually quit her teaching jobs so she could tour full time.

“It was hard to stop, because being a music teacher you know your job is good,” she said. “Being a musician you’re not sure pretty much every other day whether it’s actually a noble job.”

It wasn’t until 2017 that Sasami began writing her own songs, partially so she’d have something to use as practice material for producing music. “Morning Comes” on her debut is the first song she ever wrote. “I wasn’t trying to invent anything new,” she said of her first album. “It came from a much more diaristic place.”

With “Squeeze” she wanted to take a more dynamic approach to better suit her self-described “chaotic clown-y energy.” Yet sometimes even when she pushed her compositions toward her more confrontational tendencies, the arrangements wouldn’t obey. “The thing about songs is that they’re like children,” she said. “You can be like, ‘I want you to be a hockey player. I want you to be a ballerina.’ You can sign them up for the lessons, but if they don’t want to be that, you can’t force them to be that.”

Though “Squeeze” may embrace genre signifiers like double kick drums and slap bass, it’s far from a typical metal album. Her pulverizing cover of Daniel Johnston’s “Sorry Entertainer” features an impassioned finger-tapped guitar solo and full-throated screaming, but as the music trails out, you can hear Sasami’s resulting coughing fit. Disparate influences pulse throughout the LP, like the glam rock boogie of “Make It Right,” the swirling electronic textures on “Call Me Home” or the power ballad tendencies of “The Greatest” and “Not a Love Song.”

With its loud and proud acoustic guitar strumming, “Tried to Understand” provides one of the album’s breeziest moments. The original version featured instrumentation from the fuzz enthusiasts Ty Segall, who co-produced several “Squeeze” songs, and Dinosaur Jr.’s J Mascis. “I tried my hardest to make that a heavy rock song, but the song was like, make me a Sheryl Crow pop song,” Sasami said.

She compared “Squeeze” to a haunted house where every room is different, or a corn maze where you don’t know where the next turn will take you, and traced this impulse back to her time in education. “That’s the job of a music teacher, to always keep the kids surprised in a place of whimsy and fantasy,” she said. “I truly felt like a fairy with a recorder and a guitar.”

Facebook
Twitter
Pinterest
WhatsApp
Previous articleIn an Arctic Outpost, Friday Nights Are for Curling
Next articleReview: At Rothko Chapel, a Composer Is Haunted by a Hero

The Problem With FSBO in Ottawa

The Incredible Benefits Of Cryptocurrency Trading

Five Tips for Coming Up with Unique Business Name Ideas

Value of Painting Maintenance for Your Company

Elements to Consider When Looking for a Video Conferencing Device

The Problem With FSBO in Ottawa

The Incredible Benefits Of Cryptocurrency Trading